The election of a majority Liberal government in the June 12, 2014 Ontario election has a number of important implications for professors and academic librarians in the province. During the election, OCUFA analyzed the higher education platforms of the Liberal Party as well as those of the other main parties , posted the response of the parties to the OCUFA party questionnaire , and […]

Every election, OCUFA asks Ontario’s leading political parties to fill out a questionnaire on issues important to professors and academic librarians in Ontario. It is a chance for each party to outline their plans for higher education and labour relations. Today, we are pleased to release the results of the 2014 survey. Here are some […]

The provincial election is just over a week away and there are still plenty of ways to get involved and have an impact before E-Day. Tell the party leaders and your local candidates to make higher education a priority. Use the “Take Action” function on the OCUFA election webpage to send an email to your local candidates […]

Tonight, the leaders of the three major parties will square off in the first – and only – televised debate of the 2014 Ontario Election campaign (6:30 p.m. on CBC). Kathleen Wynne, Tim Hudak, and Andrea Horwath will lay out their respective visions for the province. The media analysts will likely focus on who gives […]

Several weeks ago, we sent out a questionnaire to each of the political parties asking them to provide more information on their plans for higher education in Ontario. Their answers are in, and we are pleased to make them available: Provincial Political Party Responses to the OCUFA Election Questionnaire All of the answers are the […] 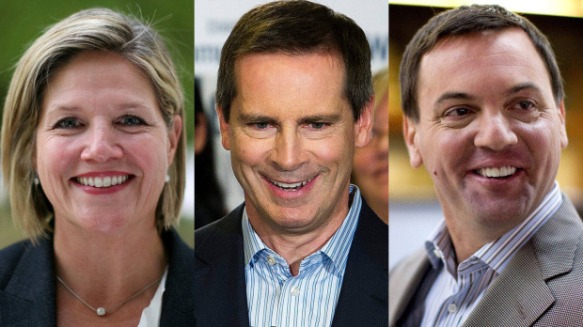 With a mere eight days of campaigning left, Ontario’s close election campaign may come down to tonight’s leader debate. So what should faculty and students be looking for? Higher education will likely come up during the debate, especially after the Liberal-NDP spat over per-student funding. There are two big policy questions at play here: How […]