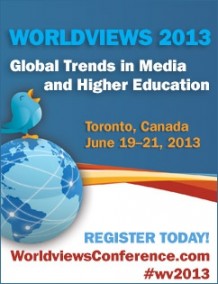 Newsflashes from the global campus. Reporting trends, interpretations and relationships.

Coverage of university rankings as a benchmark for institutional quality – in light of emerging-world priorities such as provision, affordability and employability

The breadth, depth, and diversity of coverage in China and India as emerging (major) players in higher education

Hooking up or a long-term relationship? Future depictions of the professoriate and of journalism.

An identity crisis? The place of journalism schools in the academy and in the marketplace

Unlocking the tower. How trends in media, citizenry, and government are altering the academy.

The sustainability of open access in news media and higher education, and the impact of massive open online courses (MOOCs)

The age of austerity for higher education: public reaction and media depictions

The organizers of Worldviews: Media Coverage of Higher Education in the 21st Century are University World News, Inside Higher Ed, OCUFA/Academic Matters and OISE/University of Toronto.

University World News is an international newspaper and website on higher education issues produced by a network of education journalists in every region of the globe.

Inside Higher Ed is an independent website with news, ideas, career advice and thousands of job listings in higher education – with readers at every kind of college and university, all over the world.

The Ontario Confederation of University Faculty Associations (OCUFA) represents 16,000 university faculty and academic librarians in Ontario universities. Academic Matters, published by OCUFA, is a journal and website exploring Canadian and global higher education concerns from a diversity of perspectives.

The Ontario Institute for Studies in Education of the University of Toronto is an international leader in the research, teaching and study of issues that matter in education. As Canada’s largest faculty of education, the Institute operates a broad range of innovative academic programs and research initiatives.