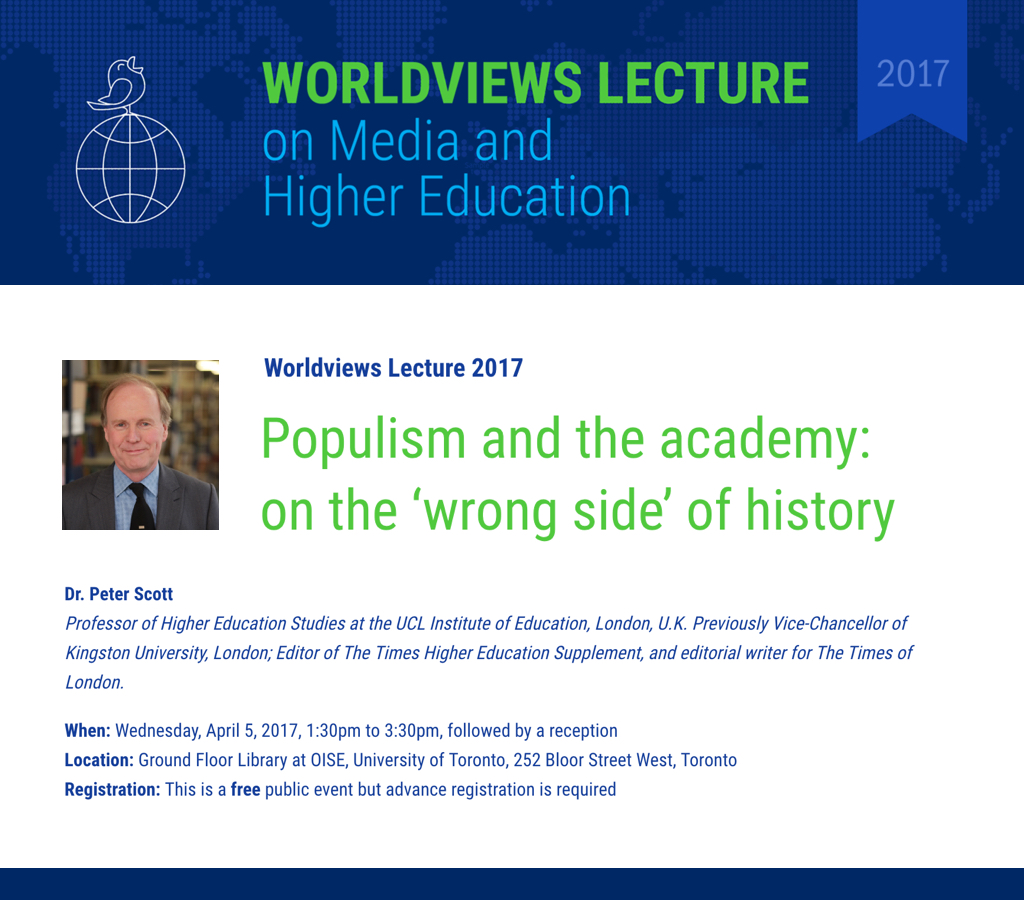 On April 5, Professor Sir Peter Scott, a Professor of Higher Education Studies at the UCL Institute of Education, delivered the third annual Worldviews Lecture on Media and Education with a focus on the populist challenge for universities.

In a live video broadcast to an audience in the library of the Ontario Institute for Studies in Education (OISE), Scott described how right-wing populism has driven a series of events over the past two years, including the election of Donald Trump and the vote of the United Kingdom to leave the European Union. Then he addressed the challenge universities face coming to terms with this rising tide of anti-elitism.

Scott illustrates how populism has been driven by the failures of free-market neoliberalism and the growing gulf between haves and have-nots. While universities are considered elite institutions, home to many of the world’s experts, populism represents a general distrust of government organizations. Scott sees danger in this reality, but he argues populism’s strength should not be exaggerated and those in the academy should not be spooked. Instead, he believes that goal should be to continue expanding access to higher education as a key component of citizenship in democratic societies.

Scott concluded by presenting a four-point plan to counter the populist narrative:

Following Dr. Scott’s virtual lecture, a panel of local academics continued the discussion of the populist challenge from a variety of perspectives.

Idil Atak, Assistant Professor in the Department of Criminology at Ryerson university, discussed the malicious myths that stigmatize immigrants and are one driver of populism, especially during election periods. She detailed how enthusiastically these stories are picked up by the media, and how the academy has a role to play in conducting the evidence-based research that dispels these myths.

Greg Lyle, President of Innovative Research Group Inc., agreed with Professor Scott that populism is not winning. He highlighted poll results showing that the Canadian public values postsecondary education, and that two-thirds of Canadians believe that experts should be trusted. He argued that as economic gaps widen, individuals feel that the elite, including politicians, have lost touch with their constituents. He concluded by advocating that universities engage more with their students as individuals and people.

Emma Sabzalieva, a Doctoral researcher in the Centre for the Study of Canadian and International Higher Education at OISE, talked about students from a global perspective. She highlighted that approximately five million students travel internationally for their education, and a third of them travel to the US and UK – the countries most visibly afflicted by populism. While there might be short-term ripples, she does not believe international students will stay away from these countries over the long term.

Steven Tufts, Associate Professor in the Department of Geography at York University, stated that while it may be making headlines now, populism isn’t new. He discussed the ‘common sense revolution’ of the Mike Harris era in Ontario, a populist platform that targeted postsecondary education among other social programs. He further argued that populism is not a right-wing issue, that it can also be driven with a progressive agenda. He concluded by encouraging professors to engage with their communities and join the fight to extend fair wages and fair working conditions to all workers.

This event was webcast live on April 5.