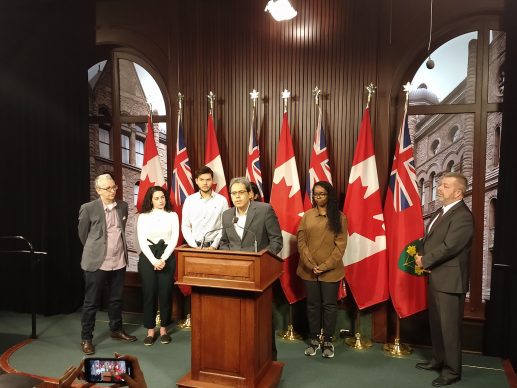 On Tuesday, February 19, OCUFA participated in a press conference organized by the Canadian Federation of Students–Ontario at Queen’s Park. OCUFA Vice-President Rahul Sapra joined a panel of speakers including Nour Alideeb, Chairperson of CFS-Ontario; Sam Hammond, President of the Elementary Teachers Federation of Ontario and RM Kennedy, Chair of the College Academic Division of OPSEU. The panel focused on the adverse effects of the government’s recent changes to the student assistance program (OSAP), the tuition fee cut without an increase in core funding for colleges and universities, and the attack on students’ rights.

The speakers shared their concerns about the government’s pattern of decision making without consulting sector stakeholders. The speakers noted that the January 17th announcement is a direct attack on student governance, representation, and voices and will make postsecondary education in Ontario less accessible.

The press conference also marked the launch of the “We The Students” campaign. To find out more about the campaign and the upcoming events and actions click here.