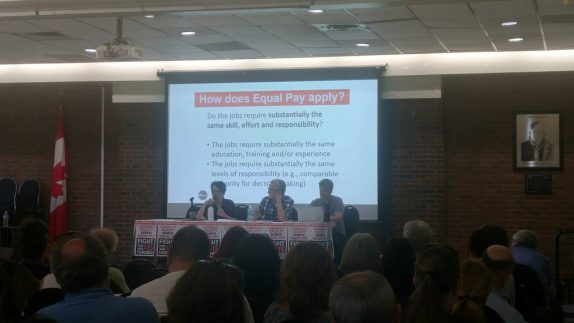 The event was the first step toward creating a broad coalition of university and college contract faculty to lead the charge against precarity in post-secondary education and fight for fairness for all contract faculty province-wide.

The evening began with welcoming remarks from the event hosts including OCUFA’s chair of Contract Faculty and Faculty Complement Committee, Kimberly Ellis-Hale. Following an overview of contract faculty’s new rights under Bill 148 and the process for filing equal pay complaints with the Ministry of Labour by a legal expert from Parkdale Legal Clinic and equal pay activists from the $15 & Fairness campaign, the discussion centered on different ways and strategies for enforcing these rights, particularly the right to equal pay for contract faculty.

The Fight for $15 & Fairness campaign and the movement they have built has made great advances in recent months with the passage of new legislation in Bill 148 that will bring more fairness to Ontario workplaces. Among these changes is new equal pay legislation for contract, part-time, temporary and casual workers, which came into force for non-union workers on April 1, 2018 and will be implemented for unionized workers on the earlier of their collective agreement expiration or January 1, 2020.