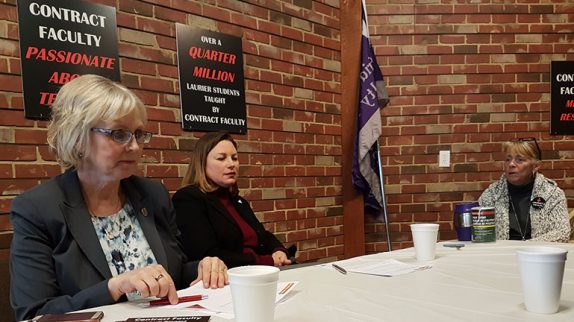 Following months of bargaining, the Wilfrid Laurier University Faculty association has reached a tentative agreement with contract faculty at the university. The terms of the agreement are currently being put to a ratification vote.

The deal comes after months of bargaining, and a strike vote in which contract faculty voted 95% in favour of walking off the job if a tentative agreement could not be reached with the university administration. Following the strike vote, the association began the important work of organizing for job action in order to put more pressure on their employer.

In December, representatives of the Canadian Association of University Teachers held a workshop on campus to train a packed room of contract faculty on important strategies for messaging, working with the media, and building solidarity with other members of the campus community.

As talks with the administration continued, dozens of faculty volunteers were identified and organized to serve as picket captains and take on other critical strike duties. With a solid core of their members organized, the faculty association was prepared to walk off the job if the time came.

On January 4th, the strike office opened, with members of the community, media, and local politicians all invited to come and learn more about the critical issues at stake. MPPs Catherine Fife and Peggy Sattler both attended and noted their strong support for the concerns of contract faculty around precarious employment and the need to be fairly compensated for their work.

Less than 48 hours later, a tentative agreement was reached with the employer demonstrating just how important it is to being prepared and organized, not just at the bargaining table, but on the ground.