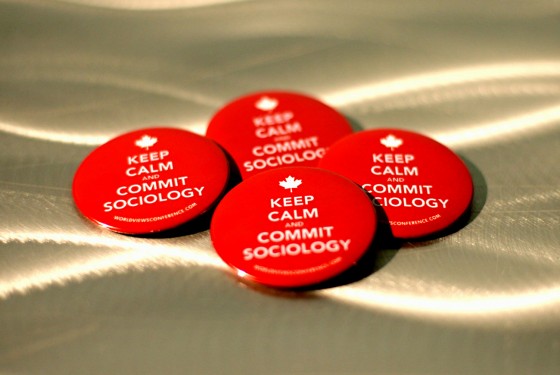 A group of academics from around the world intend to commit Sociology at every panel, keynote and even during coffee breaks at Worldviews 2013, a conference co-organized by OCUFA.

“Keep Calm and Commit Sociology” reads the promotional buttons produced by a group of academics who took Stephen Harper to task today over recent comments about the sources of terrorism while also promoting their annual conference. The buttons are a riff on the 1939 poster designed by the British government to raise the morale of the public in the aftermath of widely predicted mass air attacks.

On June 19th – 21st, academics from around the world will be descending upon Toronto to discuss issues of higher education, technology and the media during Worldviews 2013: Global Trends on Higher Education and Media.

“Our conference examines new global trends in media and higher education,” said Joel Westheimer,  University Research Chair in the Sociology of Education at the University of Ottawa. “Mr. Harper’s recent comments on the sources of terrorism speaks to a kind of anti-intellectualism that has come to characterize his government. The very purpose of our conference is to discuss a number of sociological issues in higher education that are relevant to all Canadians.”

Worldviews 2013 will highlight the importance of committing sociology by examining the changing nature of higher education, media coverage and looking at the way technology  is changing the two sides of the equation.

“There is a war on information in our country,” said Westheimer. “On the media, on academics, on libraries, on archives, on the census – the list keeps going. We need to understand the ‘why’ of things, and cutting away our ability to make informed decisions will invariably derail our country.”

Worldviews 2013 will be taking place at the University of Toronto, June 19 to June 21. Buttons are available from the Worldviews website for $5 a piece and proceeds will be donated to the Canadian Sociological Association’s student research award.